How One Church Redesigned with Men in Mind

Brookville Road Community Church in New Palestine, Indiana, exists to inspire people to become wholehearted followers of Jesus. They place a special emphasis on reaching men because they've found that when husbands and fathers feel more comfortable in the space, they are more likely to return to church and bring their family.

The leaders at Brookville Road have cued into a reality that Barna uncovered in a recent study on men in America titled, Five Essentials to Engage Today’s Men. The study, in partnership with BetterMan, a resource for men’s ministries, was conducted to find out how both churchgoing Christians and men overall are navigating 21st-century waters.

The silver lining: While those under 35 are less likely to be practicing Christians, the ones who are involved in church are more likely than older generations to engage in church-related activities. Young church-going Christian men mean it when it comes to church.

Learn how physical AND digital ministry space can work together to support the discipleship journey.

Nearly three-quarters (72%) have attended a small group or Bible study in the past month, compared to just over half of men 35 to 54 (54%) and two in five men 55 or older (40%). They are also more likely to be involved in community service projects (46% vs 27%) or receiving mentoring themselves (41% vs 19%). Young men who connected to the Church are among the most invested.

According to the study, middle-aged and older men make up a much larger percentage of men in the pews, but younger men are more likely to get involved in other ways. It’s also clear that intergenerational friendships, mentors and confidants have a great impact on men’s lives.

“I have found that young men want to hear older men share their experiences of what it means to be a man—good and bad,” says Robert Lewis, founder of BetterMan, in a Q&A on “Why Intergenerational Connections Matter for Men.”

“When you combine the subject of masculinity with learnings from the life experiences of older men, an unbelievable power develops,” he says.

How can churches create more opportunities for younger and older men to form intergenerational friendships and find their place within the church community? The starting point is creating an environment where men feel comfortable.

At Brookville Road, this meant replacing their Tuscany-motif walls with a color palette that feels fresh and dynamic. Aspen incorporated natural materials for interior finishes and added furniture with clean lines.

“The move toward natural materials—stone and wood—these elements created more of a masculine feel,” says Bob Gray, Aspen’s Project Developer for Brookville Road. “We replaced the dated lighting. Revised the dark, dingy hallways so they had a brighter feel. It changed the look of the whole space.”

Though the interior of Brookville Road will appeal to men and women, it is decidedly inviting for men. (Check out the article “How to Man-Up Your Ministry Space” for more tips on how to make space that feels inviting for men.)

“I think men are trying to figure out who they are,” says Robert Lewis. “They aren’t just trying to have a good career and a family. There is a deeper identity issue the research pointed out. At their core, men are asking, “What does it mean to be a man?”

Brookville extended their new colors and finishes into all of the areas that Aspen touched, including:

“The existing spaces didn’t blend,” says Bob Gray. “You’d go into the Tuscan area, then the tile hallway with huge, disproportionate lighting throughout, and it felt constricted. There was an overall disconnect of personality throughout the building.”

According to Bob, this disjointed look throughout the building is common at many churches. “Churches add new features and design the building as they put on new additions, instead of creating a cohesive, intentional aesthetic from one space to the next when an addition or renovation occurs. The leaders at Brookville Road looked across the entire facility and rebranded the entire look and feel.”

Improving a Building's Flow and Functionality

Before Aspen built Brookville’s new sanctuary, the congregation was worshiping in the gym, a space not originally designed for that purpose, and it was limiting their long-term growth. The renovation and addition are designed for easy navigation, especially into their new worship center and Family Life Center.

The new 19,500 sq. ft. worship center addition has 900 seats with the ability to expand to accommodate over 1200 seats. This increased seating capacity will allow them to double their Sunday attendance. 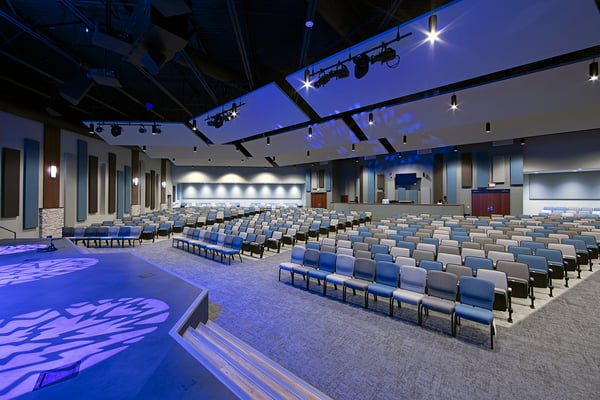 Brookville also invested in high-quality AVL to ensure that their production and tech team can provide an amazing worship experience. According to leaders at Brookville Road, “If you can’t hear the Word, nothing else matters.”

The 21,500 sq. ft. renovation to the preschool and elementary spaces allows for additional children and more flexibility for the programming. 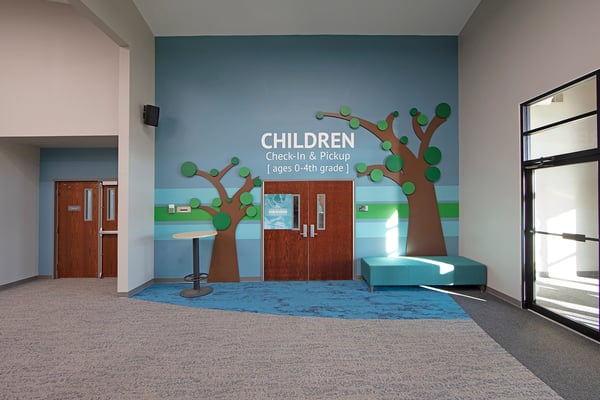 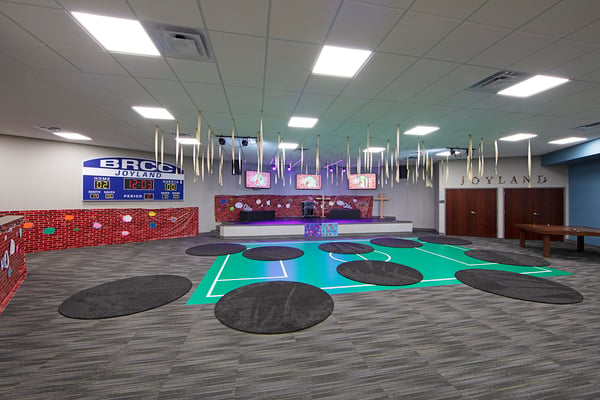 Past office spaces have been converted into a nursery and toddler area that is closer to the adult spaces for the ease of parents. 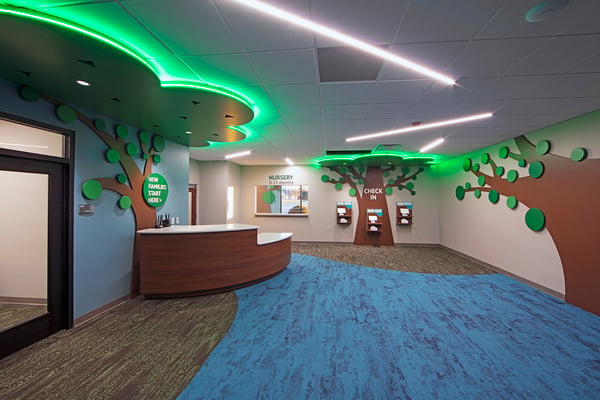 “Brookville Road is a growing, dynamic church,” says Bob Gray. “They’ve been successful in cultivating a strong intergenerational congregation with thriving ministry programs to support their diverse age groups in the church.”

The new space at Brookville is designed to help men especially feel at home in the church, a strategy that is sure to win more men and their families in the years to come.