10 Trends of the Multisite Church Movement

I was present at the beginning of this era of multisite ministry. It was an accident; I was just fortunate enough to work at Leadership Network at a time when we were making a list of and tracking the early practitioners of multisite. After a meeting with a church in 1997 that had already gone multisite, my team and I looked at each other and said, “ This is going to be big.”

We then saw a cadre of churches doing similar things across various geographic areas and denominational backgrounds. What began as a list of 78 in the ‘90s has grown to more than 8,000, according to a Duke University survey.

I believe we are still in the early chapters of this story. There has been a rapid replication of sites and systems to fit the current context, but we are a long way from seeing the totality of this movement. Drawing from the research within this report and my experience, here are some trends I have observed during the rise of expansion strategies, as well as a few shifts I think we have yet to see unfold:

Download the free facilities chapter of More Than Multisite.

Twenty years ago when I came to work with larger churches, it was a point of pride for pastors to talk about the number of seats filled or the size of the venue. Now, most younger leaders focus on how to start additional sites and turn additional seats. Both strategies are derived from a desire to have greater impact in a region, but we see this multiplication perspective spreading. 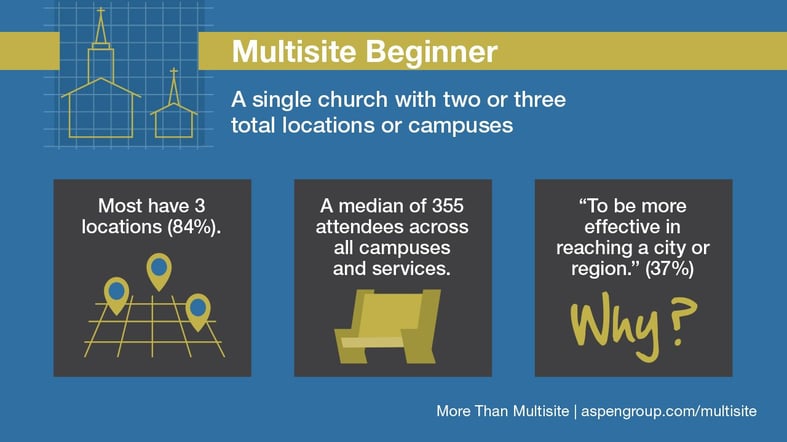 There’s a joke about how, when parents have more than two children, they have to move from one-on-one defense to zone defense. This could also apply to churches that exceed four campuses, a milestone at which relationships and communication really become complex. Of course, church staff relations and communications always have the potential to get messy, but especially with location dispersion.

I hate to see sacred spaces sold to developers, and the “aquimergertakeover” is one solution. This idea is best described by Dr. Warren Bird and Jim Tomberlin in their book Better Together. I don’t think there is a week when I don’t read a story of an older congregation giving themselves and their property to a larger, healthier growing church. This is a way to establish strong congregations quickly into communities.

4. Suburban to Urban to Rural

I’m encouraged to see that many growing suburban churches are planting sites in urban places, closer to the center of their regional cities. Part of this is driven by the housing patterns of younger adults in those regions. Those successful in this approach are tailoring sites to these communities, and many use existing facilities in the city. 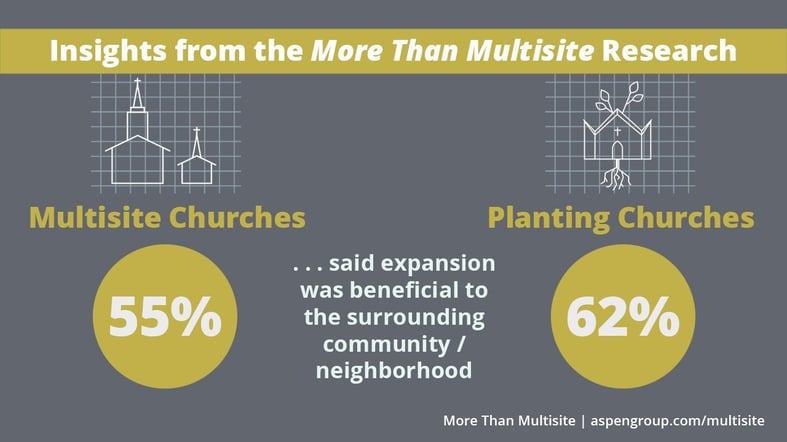 “Another big surprise of the survey was how many churches (47%) have a campus in a small town or rural area. A Montana church opened its first multisite location in a rural location instead of in a larger city. A Texas congregation is reaching into multiple small towns, because there aren’t any large cities within a three-hour drive. A North Carolina multisite leader notes: ‘We are reaching people in smaller markets and rural areas outside large cities.’”

The growth edge is in live teaching and preaching, not in video approaches. I believe the live teaching model that focuses on developing multiple preaching and teaching pastors is the new way to cultivate effective communicators for the future. For the teaching quality to remain high, there has to be continuous coaching, teamwork and development. This evolution of the teaching team model is to be applauded.

6. The Genius of Both/And

Some congregations are thinking about reproducing with both new sites and independent plants. They have different mindsets and models. Often, sites are established in a region where the team can still get together every week, while plants are more ideal for a distant geography.

More churches are also launching planting networks to multiply contextual gospel communities. In some cases, the campus pastors and planters may be trained at “home base” and then deployed based on their gifts and calling. Regardless, the congregation has become the base initiator, not just a denominational entity.

7. Waiting on the Long-Term Plan

On a related note, what you start with is rarely what you end up with. Some sites spin off as independent; some stay as sites. The initiating pastor of the multisite vision may naturally make a transition. Sometimes I call the multisite strategy “church planting on the installment plan.”

The tools used to launch a site deploy people who were previously not engaged. Typically, a matrix or grid is developed with all the “slots” for people to fill at a new campus. Once a certain percentage of these positions are filled, the site plan moves to the next stage. This creates “owners” of the new site early on and encourages those who like to pioneer new things. 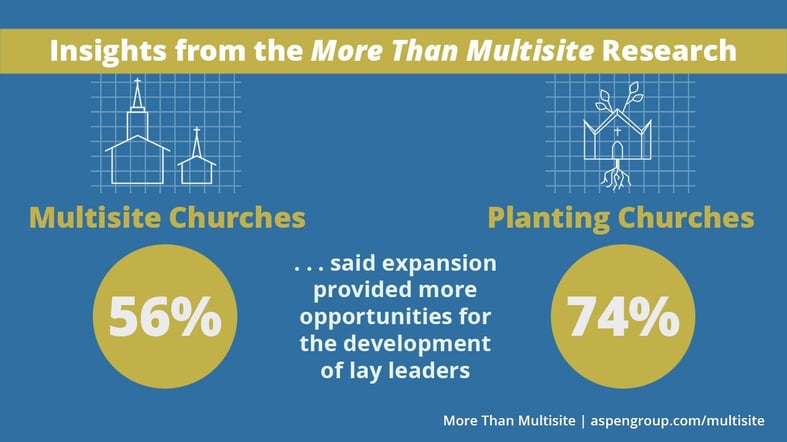 I could see more churches establishing tailored venues on multiple sites that include multiple congregations, languages, and musical styles. In addition, there are ample opportunities for churches to expand to institutions such as prisons, active adult communities, and the like.

10. Next Up: Online Campus Strategy

One of the healthiest ways to look at online opportunity is to make it the equivalent of a site, with investment and staffing according to those reached. Internet congregations need a multifaceted ministry, not just a broadcast worship service.

What trends in church expansion would you add to this list? What has been your church’s experience with moving beyond one site?

Dave Travis is the Chief Executive Officer and Chief Encouragement Officer of Leadership Network, leading a large field team that works with innovative churches and ministries across the U.S. and Canada. Previously, he was a denominational leader, a pastor, a church staff member, an engineer, and a consultant on church growth and development. He is coauthor of three books: Beyond the Box, Beyond Megachurch Myths and What’s Next. Dave is a graduate of Georgia Institute of Technology and Southern Baptist Theological Seminary. He lives outside Atlanta, Georgia, with his wife, Lynne, and two daughters.