5 Truths for Building Generous Givers in Your Church

Sometimes, churches fall into a trap of thinking that building generosity for community impact simply means building something external like a community center or a coffee shop in order to inspire people to give more to the church.

“We often think about generosity as something that pays for something. No doubt a new community center is more interesting to give to than church office supplies. However, we do a disservice to our givers when we're trying to get them to give more because of what the ministry is funding rather than focusing on what the mission of generosity is.”


Learn how to inspire your congregation to greater levels of generosity on behalf of your community.

Here are five truths for cultivating true, transformational giving in your church: 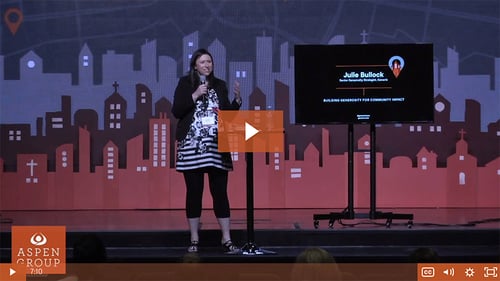 One of the Apostle Paul’s chief roles during his missionary journeys to the early churches was to raise funds. Paul never simply raised funds, however. Anytime Paul was challenging churches to give, he was also always teaching about giving. His role when going to these early churches wasn’t just simply to give to the poor churches from the rich. It wasn’t about wealth redistribution at all. In fact, the church in Macedonia was one of the poorest churches, and yet they gave out of abundant generosity as the example Paul shares for others to follow.

“We shouldn’t evoke giving just for the sake of giving or even for the sake of funding something,” says Bullock. “Giving should be birthed out of a gospel response. Paul taught this to the early churches. Generosity doesn't just fund the mission. It actually is the mission.” 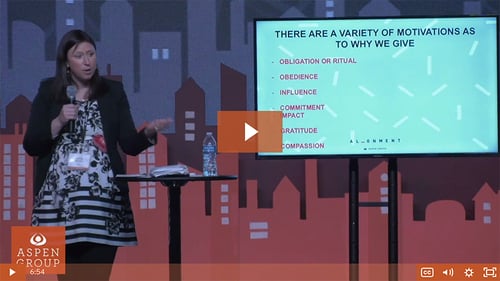 No matter the reason we give, God does not promise us a return on our investment. In fact, when we try too hard to show a correlation between what we give and what God–or the church–returns, that leads us down a dangerous path.

“The church’s role isn't fundraising and producing a ‘donor output’; it’s discipleship,” says Bullock. “A gospel response is the one pure reason that supersedes all other motivations of why people should give. If our people haven't been taught about why they should give, their giving might be temporary or artificial depending on external circumstances. What you're giving from is often more important than what you're giving to.”

3. Anonymity in your generosity often hinders God’s ability to shine through your story.

There is a myth that generosity should be anonymous. The truth is, generosity has the potential to bring more people to God and should be something you should attribute God’s name to and often your name on as a follower of Christ as well. 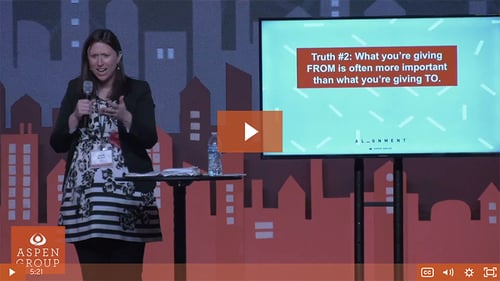 In scripture, giving was actually a very public act. The woman with the two coins, David building the temple, the leaders that came behind David to build the temple, the list could go on. People in scripture were far more public about giving than we are in our private, western culture. Giving was public back then because the motivations were pure. When the woman with the two coins gave all that she had, she wasn't boasting about it. Instead, Jesus was! He wanted them to know the story of the person that the money came from.

“What does it look like for your generosity to not be anonymous— to not be boastful either, but to be something that when you share your story it impacts other people?” Bullock asks. “Empower your people to be those who are radically generous in ways that will impact others to see Christ’s love in them.”

4. If you want to deploy your people to live radically generous lives, it starts with you.

In the book of Acts, Peter healed a lame man in the name of Jesus and then was thrown into jail because of that. But 5,000 who heard the message and Peter’s proclamations believed!

“The writer of Acts tell us in chapter 4 that when these religious leaders saw the boldness of Peter and John, who were just uneducated, common men, they realized they must have been with Jesus. They had no special powers. But because of that, what they did brought people to Jesus,” says Bullock. “That radical act of courageousness, of boldness is because they were walking with Jesus and weren't afraid to show it to other people. That should deploy and empower a sea of people in our churches to go out and do incredible things in Jesus’ name!”

5. If you want to see true community impact, honor God with 100 percent of what he has given you.

The Apostle Paul writes to his apprentice, Timothy: "Command those who are rich in this present world not to be arrogant, nor to put their hope in wealth" (I Timothy 6:17). “He did not say not to have wealth. He said not to put your hope in wealth. It’s not that God's asking us to give him 100 percent. Rather, he's asking us to honor him with 100 percent,” says Bullock.

“Generosity is not just about what we give. It is about how we steward what we have already been given. Do you own your house, or does God? When someone needs to borrow something or stay on your couch, do you let them with an open hand? Or are you reserved and call those things your own? 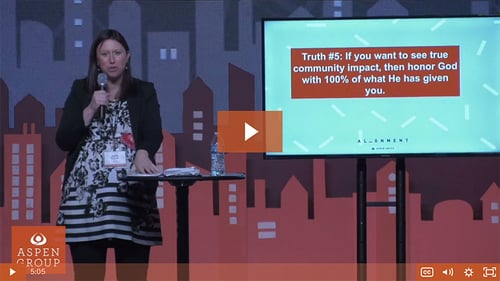 God owns everything and we are merely managers of it. Our call to generosity is to honor God with everything, and that can create tremendous community impact in and of itself.

“When people see the eternal life in us, they want that life,” says Bullock. “They want to know what that life is. If they're not seeing Jesus in us, that's not going to ultimately bring them to the transformative gospel.”

So what is it that's so radical about Jesus that is causing you to live in these ways? How are you being transformationally generous with what you’ve been given to shine more light on Jesus’ name?

Julie holds a Bachelor of Arts in Business and Economics from Wheaton College, a Masters in Business Administration from Oklahoma State University, training and certification from R&R Newkirk in gift planning and charitable estate planning, and has earned her international certification as a Certified Fund Raising Executive (CFRE). Julie and her husband Jud reside in the Tulsa, Oklahoma area and are involved in their church where Julie serves on the board and in which they enjoy raising their new daughter Jayma.