“God’s Got This”: The Testimony of Thrive Christian Church

The Time Was Right

Central Christian Church was booming. With a strong presence in Carmel, Indiana, a thriving suburb of Indianapolis, attendance was nearing 600. The facility was designed to house 300-400 people. As space grew tighter, it became increasingly clear that the outdated facility no longer matched the needs of the young families, children, and youth that Central Christian was attracting.

It was time to make a move. In 2001, however, Central Christian had purchased an 82-acre parcel of land in Westfield, Indiana, to prepare for future growth. The church began making plans for a new building on this site in 2004-2006. Budget constraints and other stressors thwarted their plans, however, and the church suffered severe losses within the staff and congregation.

But hope wasn’t lost for Central Christian Church. In 2013, the church hired Graham Richards to serve as senior pastor, and the path was repaved for the church to finally move forward with a building project that would match their vision for the church.

“We knew one day we’d move out of our current building and relocate,” says Richards, “but only when God showed us that it was the right time to move.”

Though the church leaders and congregation sensed that it was the right time to move forward with the large property they had purchased more than a decade earlier, they had many hurdles to clear before their dream could become reality.

Bob Gray, a project developer with Aspen Group, says, “The church was still carrying some pain from the past. Before embarking on a journey toward relocating their church, they wanted to make sure they were healthy and ready for the changes.” 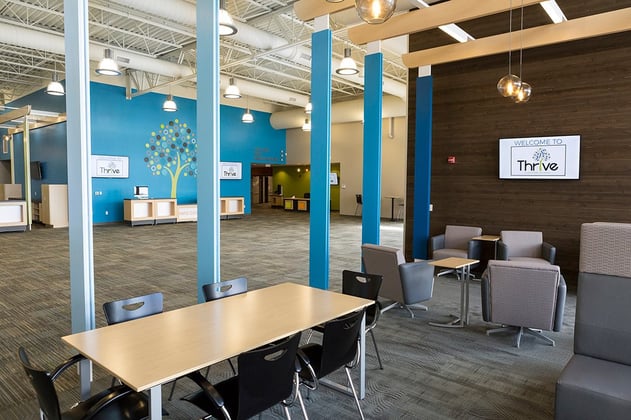 Trust and faith were key components in this equation. As the process to relocate got underway, problem after problem presented itself. First, the church had to find a buyer for their existing building and property. Then, in order to fund their new building project, the church would need to sell a considerable amount of acreage at their new site, and local opposition and competition for their land had already begun to stir.

Surprisingly, a buyer for their existing building surfaced. The only problem was that the church didn’t have a financing solution in place yet to begin construction of the new site. According to Gray, “Once the building sold, they would be nomads. They didn’t have a place to go.”

Where would Central Church meet while they waited for all of the other pieces to fall into place? And not only that—selling the existing church building meant their preschool would be uprooted and in need of a new, temporary location.

“The experience with the church was unique in the fact that there were so many barriers in place. If any one of these toppled, the project was gone. You’ve got all these things stacked up that could crumble this thing at any time,” Gray says.

With one hurdle after another, it would only seem logical that the enthusiasm for renewal would start to dim. A move to a new location often felt bleak and problematic. How do you keep people’s passion and zeal from dwindling?

That’s when God stepped in.

In a matter of weeks, pieces began to fall into place.

After some time on the market, interest in Central Christian’s existing site began to spread. Two churches and a school approached Central with offers to buy the building. Another area multisite church offered to buy Central Church’s original facility with cash. They also allowed the congregation to continue using the building and maintaining the daycare until their new facility was done. Another local church offered to let Central share their space, so the congregation had a temporary home once they had to move out of their old building. 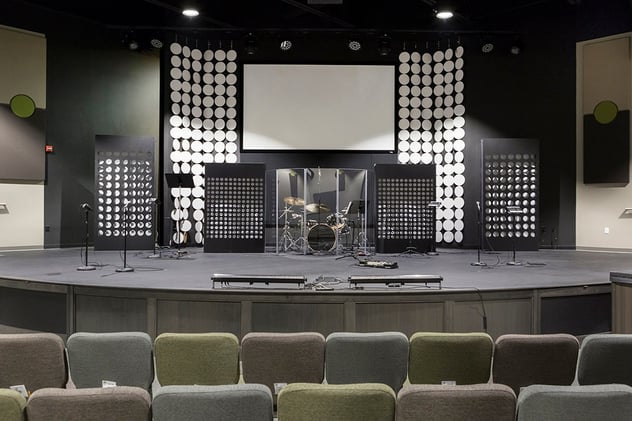 Meanwhile, the church was contacted by a developer who negotiated to purchase the excess land that Central had purchased back in 2001—60 of the total 82 acres. This developer had plans to turn the land into a residential community, right next to the church.

The Solomon Foundation played a key role in bridging the church’s financing so that they could close the sale of their existing property and begin construction on the new site while waiting for their full financing to go through.

“Several things came together, where, undeniably, it was God’s hand and he was just showing us, ‘Now is the time,’” Graham said. Gray put it another way: “Every time we asked God to show up, he did.”

“You can’t ask for anything better. You’ve got the community being built, you’ve got the location, and you’ve got the ability for the church to reach these people and offer them opportunities like the daycare facility,” Gray says.

"God's Got This" became the rallying cry of the entire congregation and the theme of their capital campaign.

An Anchor in the Community

“They didn’t want to forget where they came from, but the season was changing, and they knew they needed a new name to reflect the new era they were moving into,” Gray says. 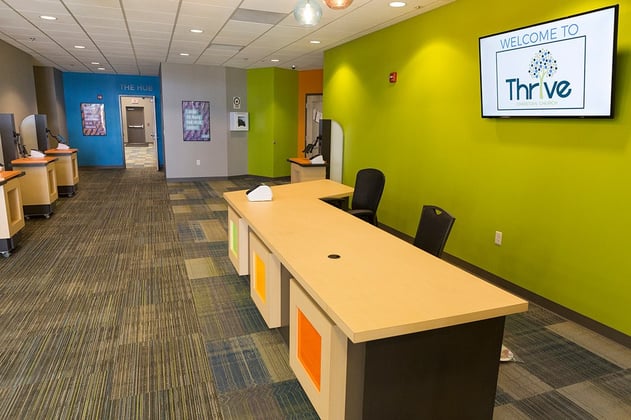 The new Thrive Christian Church is a beautiful 25,005 square foot space on 20 acres in Westfield, Indiana, a booming suburb of Indianapolis. A bike path runs around the perimeter of the church, connecting it to the residential areas nearby.

No longer are you met with low, dark hallways and ceilings. The church entrance is filled with large windows that let in bright, natural light. High ceilings draw your gaze upward; the space is open, friendly, and fun, yet simple.

A large, prominent cross out front reminds the Thrive congregation what their mission is: to bring Jesus to the unchurched within their large, growing community. Thrive wants to love and serve its community by being the place where these families can land, connect, and grow.

With an emphasis on children and youth spaces, Thrive knows their daycare and preschool programs will meet a real need within the community and create a natural way for young families to discover the church.

The church is also excited to share their space for community events like meals, concerts, and meetings. Since opening its doors in July 2017, the church has already seen immense growth, with attendance numbers rising back up over 500 for weekly worship. 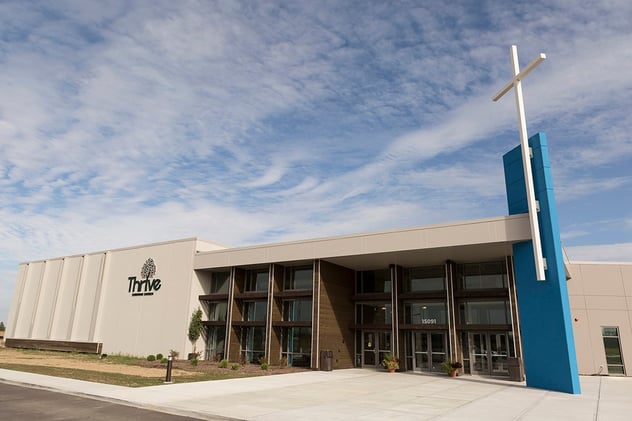 As they tackled challenge after challenge to revamp their name, mission, congregation, location, and building, the building’s fresh design tells a beautiful story of a church that has weathered some hard times and is now growing stronger as a result of their challenges.

“Thrive came out of this experience with a clearer picture of who they are,” Gray says. “In honoring the legacy of their past and rallying around their renewed mission, I have no doubt that the Thrive congregation will live up to its new name!”

To learn more about Thrive Christian Church and to see more photos of their finished space, check out Aspen Group's portfolio.