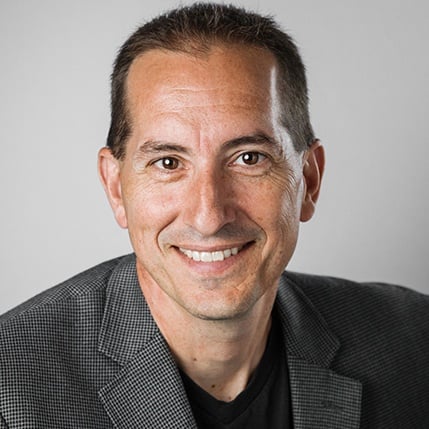 How to Build Your Church for Community Impact

Churches once held a place of influence at the center of our communities. In the past, many hospitals, colleges, and social services were launched out of a vision to obey Jesus’ admonition to give to the poor, clothe the naked, care for orphans, and visit the imprisoned. Churches were viewed as an anchor in our communities, and they literally were given a central place in the town square.

Today, congregations are often relegated to the fringes of our towns. Zoning laws and conflicts over church and state divisions often prohibit churches from gaining access into places and activities where the light of Christ is needed most. The megachurch movement, too, created a need for more acreage, so many churches opted to build where land was plentiful, often on the outskirts of town. The unintended consequence of this strategy is that churches are no longer visibly present in the middle of our communities like they once were.

With all of these forces in play, do you ever wonder how the Church will find its way back to the center of influence within our culture? I know I do.

Thankfully, in my role as an account executive for Aspen Group, I’m working with more and more churches that are asking a similar question—How can we become a church that’s in and for the community?

As churches strive to impact their local communities—the neighborhoods right where they are—I believe the Church will regain its influence, first locally, but ultimately in the culture overall.

Learn how your church can renew its influence and impact by becoming a church that is in and for the community.
Watch the video here: 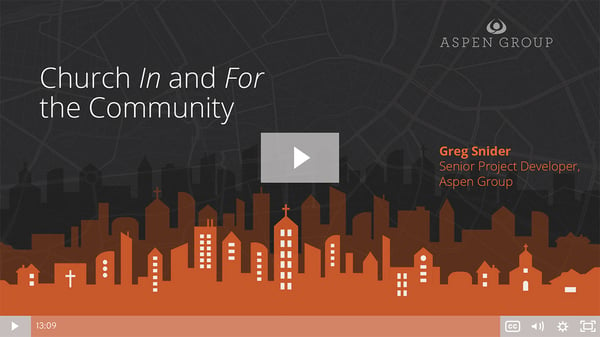 3 Keys for Regaining Our Place in Communities

Here are three steps toward winning our way back into the heart of our communities:

Aspen has long believed in the power of research data for providing clarity and context. Like the “men of Issacher, who understood the times and knew what Israel should do” (1 Chronicles 12:32), we have engaged in various studies with Barna Group and other research groups to understand cultural shifts and trends that are impacting the church.

In More Than Multisite, for instance, we surveyed churches from across the country to learn about churches with a growth mindset. When we asked multisite church leaders, “What is the primary reason to pursue a growth strategy?” 43 percent responded, “To be more effective in reaching city/region.”

Today’s growing churches are strategically penetrating geographic areas where they can embed more deeply into the life of the community. 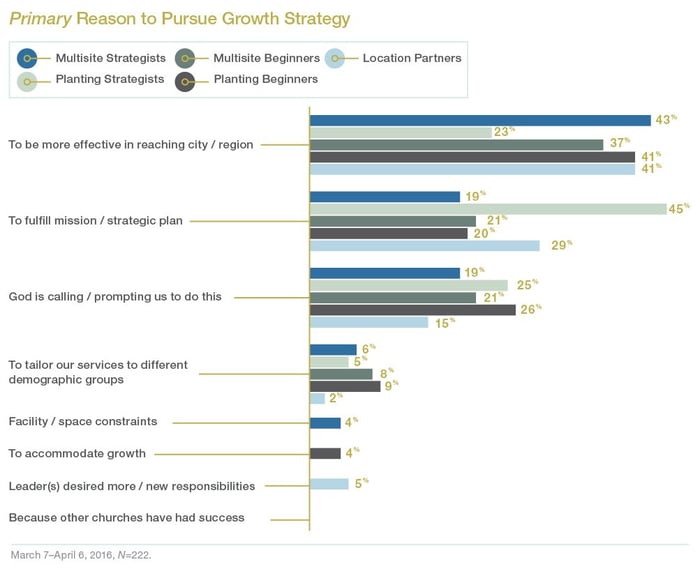 The early church gained influence in their culture by obeying Jesus’ command to be his witnesses “in Jerusalem, and in all Judea and Samaria, and to the ends of the earth” (Acts 1:8). As the first church shared the Good News locally and lives were transformed, the Word spread and people far away were drawn to follow Jesus too.

Today, many churches are seeing this same kind of ripple effect as they focus on building a positive local presence within their communities.

Churches that are striving to gain influence in their communities start by cultivating relationships with those who are shaping daily life. They get to know their mayors, school principals and superintendents, business leaders, and other community leaders.

Along with developing relationships, many churches are creating space for community impact. Community Christian Church built both their Naperville and Plainfield, Illinois, sites with community needs in mind. In Naperville where Yellow Box is located, the city lacked a public performing arts center, which was a real need in the community. The church strategically outfitted its auditorium so that it could serve the needs of the church for Sunday worship, and double as a community state-of-the-art performing arts center throughout the year for plays, concerts, and other public events. 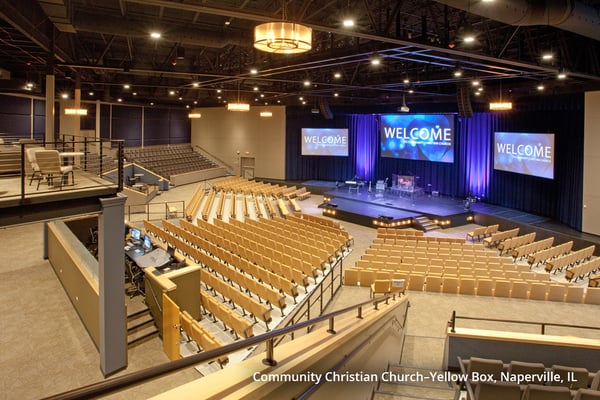 At COMMUNITY’s Plainfield campus, the church built a community commons, with a large event center, performing arts studio, and sportsplex to serve the needs of the area’s growing family population. 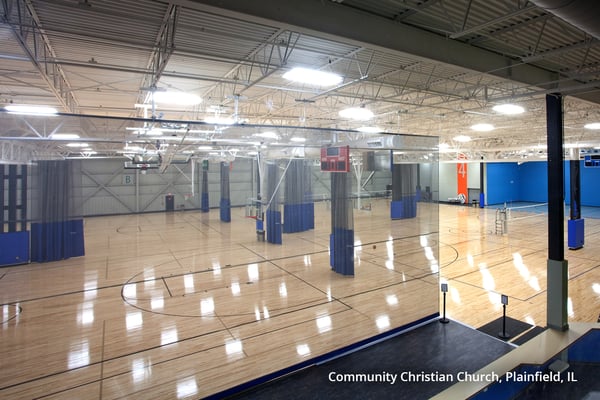 Chapelstreet Church in Geneva, Illinois, recognized a void in facilities and programming geared for families of children with special needs. They intentionally built their children and youth space and hired a skilled director to oversee their special needs ministry. 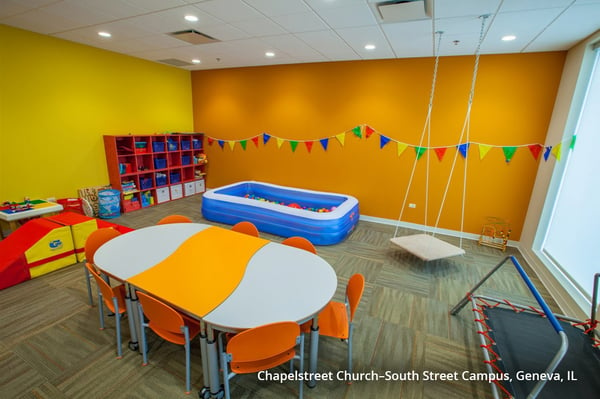 A community can tell what a church values most by what it invests in. What do your church’s activities and events tell your community? Do they see you investing time and resources in the betterment of your community, or are you more internally focused?

Do you invest in raising up leaders and volunteers specifically dedicated to community outreach? How much of your time is spent on creating a Sunday morning experience compared to a seven-day-a-week involvement in the neighborhood?

Does your church building itself honor the community and edify it, or is it an eye sore?

One simple way to measure the impact you’re having on your community is to ask, if our church went away, would the community or neighborhood care?

If your answer to the question above was yes, then your church is likely on its way to regaining influence within the community. If no one would notice, or worse, if they’d breathe a sigh of relief if you were gone, then you may have some work to do to build a positive relationship between your church and the community so that you can make an impact in your community.

In years gone by, when church was at the center of community—literally and figuratively—the church had influence on the culture. Trust in the Church as an institution has eroded and values in America have shifted dramatically in this modern era.

For the church in America to regain influence in our world, we must first seek to build relationships and trust by loving our neighbors—putting our faith into action right where we are in our communities. As we make a positive impact in our neighborhoods, we can begin to influence the culture around us.

Harbor Churches in Michigan is a powerful example of a church that has earned a voice at the community table. Step by step, they’ve been investing into each of the communities where their multisites are located. Because of the positive impact they’re making in their communities, their reputation and the relationships they’ve built have created an open door for them to influence the future of the community.

In fact, Harbor Churches was invited to help master plan an entire community development project, which includes parks, businesses, housing, and their facility at the center of this town square. Because Harbor has made a positive impact on their community, over time they’ve earned a seat at the community development table and can speak into policies, programs, and public life.

Not for Members Only

In our Aspen/Barna Making Space for Millennials study, we asked Millennials to tell us what their view of the church in America is based on four different images—a wagging finger, an outreached hand, a bullhorn, or a lively worship gathering. One in four chose the overtly positive image—a helping hand reaching out to a person in need (24%). It’s encouraging that a significant proportion of Millennials in general view Christianity this way. The percentage is even higher among practicing Christian young adults (34%), indicating that those who are engaged in a local church want to live out a faith that is actively reaching into the community.

Many Christians are hungry to serve and make the world—starting with their own neighborhood—a better place. Churches like Harbor that are serious about meeting the physical needs of neighbors while at the same time meeting their deeper need to reconnect with the God who calls us into community in the first place, are the ones that are regaining influence for the Church in our culture.

How about your church? Do you exist for your non-members—the spiritually lost and unchurched? Are you taking active steps to find them in your community? In what ways are you inviting your congregation to be the hands and feet of Jesus within your community?

Greg Snider joined Aspen Group in 1999. In his role of Ministry Space Strategist, Greg partners with churches to discover how they can maximize their facilities to create space for ministry impact. He has written and presented on the power of connecting space, building churches for community impact, and the hybrid "phygital" church experience.