When footage of an inferno engulfing Notre Dame Cathedral in Paris flashed across our news feeds, it felt as if the world collectively gasped. How could this iconic cathedral be at risk of total destruction? What would Paris be without Notre Dame to anchor her?

One day later, the fire barely extinguished, $300 million was donated to restore the nearly devastated 800-plus-year-old building. Before the end of the week, donations had reached $1 billion and counting.

Clearly, humans around the world—Catholic or not—feel a connection to Notre Dame. This is a sacred space that epitomizes the ability of architecture to draw us toward the Divine. People throughout the world have expressed deep grief in the aftermath of the Notre Dame fire. But what is this grief about exactly, and what does it say about the things people care about most deeply?

Our collective grief over losing the Notre Dame we know and love reveals just how much space matters. And yet at Aspen, as a design/build firm for churches, we commonly hear pastors and others refute the notion that church buildings matter.

When we speak of the church (lowercase ‘c’), we’re referring to the conglomeration of congregations that facilitate the faith. Facilitate, from the Latin facilis, for easy, meaning to make something easier or more likely to happen. Church buildings—or cathedrals, in the case of Notre Dame—exist as one way people have identified to help facilitate our faith. Sacred spaces make it easier and more likely for us to connect to God.

Since the Notre Dame fire, visitors from around the world have expressed the way that this building has drawn them closer to God. In its soaring ceilings, our thoughts are literally lifted toward God. We are intuitively called to reverence when we see it, and it is the architectural design and interior finishes and furnishings that speak reverence to us, causing our body, mind, and soul to respond.

Aspen explored the effects of church architecture on Millennials in our research with Barna Group, titled Making Space for Millennials. In this study, we brought various focus groups of people, born 1984–2002, to different types of built space—a cathedral, a suburban church, an urban green space, and a coffee shop—to see which environments helped them connect best to God. 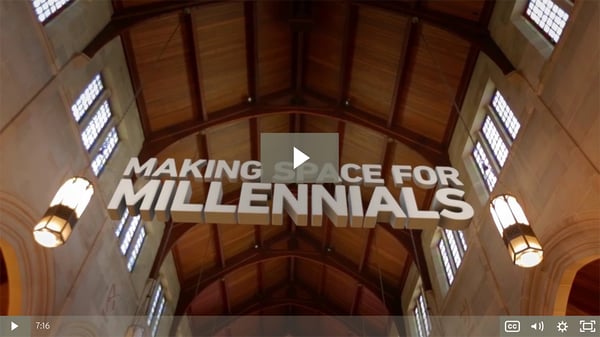 When we asked the Millennials to describe their internal response to each of these environments, all—even those who didn’t grow up in the church—said that they felt most naturally drawn to God in the cathedral. They intuitively knew to speak quietly and to sit down.

“The old churches were built to connect people to God. The altar, the stained glass windows, the soaring ceiling that pointed to the heavens—every element was designed to create a link between human and divine,” said David Kinnaman, president of Barna Group.

“The next generation is looking for a place to rest from their highly plugged in, fragmented lives,” says Derek DeGroot, director of design and integrated services at Aspen. “For thousands of years, the church has provided a natural place of respite in its design.”

Modern churches, though, typically are not designed with this goal in mind. In fact, many modern churches are explicitly constructed not to look and feel too much like a religious place. A modern church is designed to host activities, and these activities point the people to God, rather than the built space doing the heavy-lifting of facilitating one’s faith.

When we brought our focus groups to the modern, suburban churches, they said they could envision attending these churches more so than the cathedrals, but they did not feel the same sense of sacred connection and respite in these churches.

It is unlikely that any generation—let alone Millennials, who are so at home in the digital space—will seek to recreate the physical spaces of the past. But the question is worth asking: As we develop religious spaces fit for the 21st century, how can we also maintain the timeless principles of sacred space that have been developed through centuries of architecture and design?

Scripture tells us that God was a creator. One of his first works of creation was to make space for man to live in, and he was intentional and strategic about the space that he created.

Throughout the Bible, even when temples and buildings and walls were built, specific details were named, and things that were rare and beautiful and expensive were often the materials of choice. God provided a blueprint for these sacred spaces so that his people would enter his presence with reverence, and each space was designed to facilitate a specific aspect of worship—spaces for teaching, areas where sacrifices were made, altars where offerings were placed, and so on.

Though most churches today are unable to invest in the types of rare woods and gemstones specified in the construction of the tabernacle or temple, taking shortcuts on architectural and interior design may cost more than is immediately apparent.

Spending money on architecture and interior design often seems frivolous, a poor use of ministry resources. Churches want to spend money on missional activities, like serving the community, and every dollar that goes toward a building robs the church of resources for ministry impact. Or so the thinking goes.

“In the church, there’s a narrative that says we shouldn’t spend money on buildings. It’s somehow ungodly or frivolous to spend ministry resources on anything but ministry programming,” says Matthew Niermann, an architect, researcher, missiologist, theologian, and professor of architecture at California Baptist University in Southern California. “We go cheap on church buildings because we want to show the community that we care—and that we care by spending the church’s money on programs that serve the community.”

According to Niermann though, people are drawn first and foremost to a church that is physically attractive. “No matter how much the church says it’s there to serve the community, if the building says otherwise, people won’t believe your intention. A building with higher aesthetic quality adds beauty to the community and is perceived as being community focused, and speaks more deeply to the unchurched,” he says.

Notre Dame stands as an icon of architectural excellence, and Paris is made more beautiful because of her. Would people say the same about your church building?

3. Church buildings are worth preserving.

Many of today’s most reverent spaces have fallen into disrepair, demolition, or developers who see the value in converting church space into cool, new condos and other secular spaces.

As the cost of preserving old buildings increases and church attendance continues to  decline (according to data in Barna’s study, Reviving Evangelism, just 60 percent of Christians today say they've attended a worship service during the past six months), it’s becoming much more difficult to preserve our sacred spaces. Most churches in need of a building restoration don’t receive the type of financial outpouring like we’re seeing at Notre Dame.

Nonetheless, the Notre Dame fire reveals that we do, as a people, value sacred spaces, and they’re worth saving.

Mark Jobe, president of Moody Bible Institute and founding pastor of New Life Churches in Chicago, saw an opportunity to help save churches in his city—a way to redeem sacred spaces instead of giving up Kingdom ground to developers and other commercial uses.

“In urban areas like Chicago, once a church closes its doors, the building will likely be turned over to the city or to developers for commercial purposes,” Jobe says. "'Restarts' are a wonderful solution for preserving sacred space and the history and legacy of the congregation that came before.”

"Restarts" represent a practical way for a vibrant, growing faith community to move into an existing church facility, protecting the building from being rezoned and lost forever as sacred space.

These are but two examples of how the church can protect and preserve its buildings. There are likely more ways to reclaim sacred spaces (please share your ideas in the comment section below).

Though much has been lost in the fire at Notre Dame, perhaps what it will help us gain is a deeper awareness of the power of our church buildings.